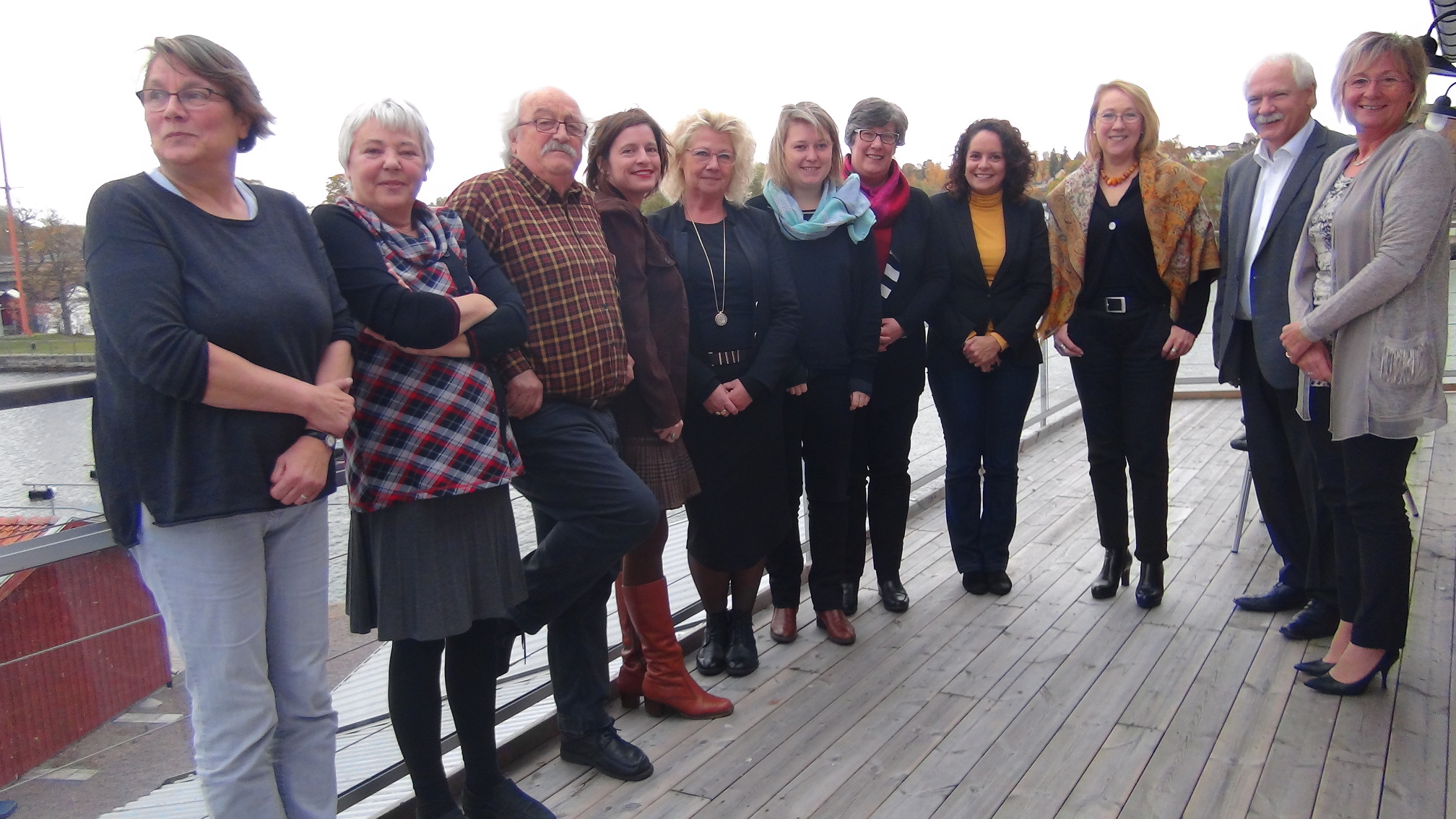 How employer branding works in the partner countries. Review of the swops consultation workshop in Sweden

From 21 to 23 October 2015, the SWOPS project partners met in Motala, Sweden. The gained project experiences in the various small and medium enterprises (SMEs) in each country were exchanged and strategies discussed. In addition it was drawn up jointly how the open advisor model must be designed to selectively initiate change processes in European companies and how to implement them successfully.

A total of ten SWOPS project team members met in the hotel Nostalgi on the edge of a large lake in an automobile museum. Present for the BPW Club Berlin as project coordinator were Cornelia F. Kramer, SWOPS project manager and chair of BPW Club Berlin, and Board member Diana Clarissa-Wilke who is responsible for the SWOPS Communication Management and Public Affairs.
From the Berlin RKW GmbH, which manages the content management of the project, Managing Director Dr. Thomas Rau was accompanied by Christiane Petzold, who works as a consultant for SWOPS. Also present were: France Joubert, 1st Chairman of the European employers’ combination Centre Européen de Ressources of Groupements of Employeurs (CERGE), Poitiers, and Sigrid Wölfing, Managing Director of CERGE. The counselor Cyrielle Berger had come for the Centre de Ressources of Groupements d’Employeurs (CRGE) headquartered in France Poitou-Charentes. Caroline Mair, an employee of the Public Affairs Agency Concilius GmbH, was in her capacity as interface communicator between France and Brussels.

For the first time on board was Regina Senarclens de Grancy, who represented the newly acquired Austrian partner ARGE.at – a comprehensive cluster of 130 companies for sustainable waste management in Styria, Austria at ARGE.at. On the Swedish side: Agneta Larsson, SWOPS project leader who also works in senior positions with the Swedish site conveyor Tillväxt Motala and her colleague Kicki Stridh, consultant for SWOPS.

Exchange of experience and transnational networking: The first day of the working visit to Sweden, which also includes the local press, was dedicated to a presentation of the French partner that their model of employer groupings a select group of interested network partners from the corporate cluster Tillväxt Motala imagined. All the other partners had the opportunity to present their organizations and activities.

The following day marked the real beginning of the SWOPS consultant workshops. Kicki Stridh who moderated the workshop, and her teammate Agneta Larsson welcomed the participants with introductory remarks structuring the next few days and gave a brief presentation of Motala region that benefits not only families with children or people with a penchant for Ikea, mooses or Pippi Longstocking.

RKW Berlin Managing Director Dr. Thomas Rau presented the country analyzes prior to interim results from the countries. Following that, the participants had the opportunity to discuss their questions about the final design of the products. In all countries, structural deficits in terms of opportunity fairness can be observed. Some of the consultants / interior reported that in some companies, a clear definition of the existing decision-making functions is entirely absent, in some companies, an organization was not even existing. In other companies there are HR executives who are not equipped with the indispensable function for these decision-making powers.

Particularly in the traditionally run family business, where the Executive is often reluctant to give responsibilities, this circumstance leads again and again to trouble. According to the unanimous opinion, HR managers often have no power in the company or find themselves in the so-called “sandwich position”. To solve this, SWOPS creates an improvement in communication between management and staff, clear rules and a balanced distribution of responsibilities and roles.

With the SME consultations resulted in Sweden the overriding question of the dissolution of gender stereotypes, because even if Sweden in terms of opportunity fairness in European comparison has the edge, is also here of further action in particular when it comes to women for MINT to inspire careers. The Swedish colleagues deal with the question of how it can be ensured that change corporate practice is.

The Swedes are pursuing the approach of bottom-up strategy, so as not to arouse in the company under the impression they would measures “imposed” on what would have reactance and thus have the opposite effect to the result. Kicki Stridh described how they had, for example, sent a mathematics teacher as an ambassador for girls in STEM professions in the company, which then gave, as girls are up for grabs for technology professions.

Regina Senarclens de Grancy recounted her experience in advising a company from Styria with about 130 employees, a service provider who provides dishwashers for large events. This employer had done right in terms of employer branding everything: Commandments are flexible working hours, family time, and the ability to plan flexibly outside of work hours also care for elderly relatives. Dreamlike working conditions that provide the employer challenges: employees remain the company despite low salaries faithful – the implementation of innovations is not just easy.

When narrowing down and defining the fields of action for the open consultation model, Cornelia F. Kramer made it clear that in addition to the corporate culture there is also need to look at country culture. The role of the advisory person come here of particular importance. This was also the role of the “Ice Breaker”, a separate strategy for the successful implementation of changes applied prepare it carefully and ensure that consent for the procedure by the companies is found prior to the consultation process.

In this context it should be noted that the process-oriented counseling must be re-adapted to various management positions. Dr. Rau referred to the importance of checking whether and to what extent leadership commitment was ever been applied in the corporate culture. This could be often seen with a glance at the company’s Web site.

On the flight back all project teams had that we bring, including the Swedish hosts not only a lot of to-dos in the luggage, but also the inspiring optimism with swops an effective employer branding tool on the way by which we structural change and – within the meaning Sustainability – will advance the cultural change significantly in companies.

The BPW Club Berlin e.V. initiated cultural change project is supported by the EU Commission in Brussels, the Berlin Senate for Labour, Integration and Women (SenAIF) and the Senate Department Östergötland (Sweden), with around half a million euros promoted.

We are delighted, moreover, that Senator Dilek Kolat of the Berlin Senate for Labour, Integration and Women (SenAIF) has kindly agreed to take over the patronage for SWOPS.